Everybody knows that I am an Apple guy.  I have a MacBook Pro, an iPad, an iPhone and numerous iPods.  My family are also Apple people.  I like the way Apple devices work, the way they are designed and the thought that goes into them.  Since Steve Jobs turned the company around Apple has been on a roll the likes of which we have rarely if ever seen in the business world.  I deny that I am a "fanboy," whatever people mean by that, in the sense that I do not slavishly purchase or praise everything Apple puts out.  But it is a company that makes it easy for its customers to remain loyal.  In recent years they have rarely put a foot wrong while reinventing many business sectors and inventing brand new ones too. 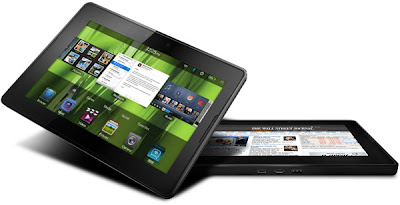 On the other hand, as a Canadian, I greatly admire the way that Research In Motion has created and dominated an important class of device.  The Blackberry is ubiquitous and synonymous with secure messaging.  The largest corporations and governments around the world have come to rely on this Canadian product.  Blackberry was, until recently at least, a gold standard around the world.  And it is all due to two very clever Canadians from the Waterloo area and the company they built right here.

However, and sadly for those of us who want to see Canadian firms succeed, RIM has encountered a bad patch.  Now, instead of being a unique provider of a unique product--secure messaging services for the government and enterprise market--RIM has become just one of many purveyors of the "smartphone."  And it is taking a beating.  Apple entered the smartphone market in 2007 to jeers of derision from the industry.  How could a mere computer company understand their industry?

But Apple is now making the most successful smartphone in the world and everybody else is copying what they do.  Nokia was a world leader, but faded so fast that it had to sell its soul to Microsoft just to survive.  RIM itself has become a world-class underachiever, over-promising and under-delivering over and over.   It is losing market share and the confidence of users and shareholders alike, to the point that its market value is a fraction of what it used to be.

Take the Playbook.  This is a tablet, with a 7 inch screen, that RIM released about a year ago and apparently thought could compete directly against Apple's iPad.  Guess again, RIM!   For a first generation device the iPad 1 was, if not exactly as Steve Jobs claimed "magical" it was at least extremely well thought through.  I bought one the first day they went on sale in 2010 and it has never let me down.  Apple got it right with the iPad two years ago and sent all its competitors off to their drawing boards.

And guess what they all did, RIM included?  Well, they thought that if they produced tablets that did what the iPad did and priced them to match up with the iPad, they could grab a fair slice of the tablet pie.   What they have all found out is that to take a piece of Apple's market share they have to considerably outperform or underprice Apple, or both.  In addition, Apple's real ace in the hole is its stores for apps and music.  It is a question of having the right hardware, software and content.  It seems that only Amazon has figured this out.  Its new Kindle Fire tablet comes in at $199 but it is a limited device with limited aspirations, and it is selling very well because of Amazon's store and content.

The Playbook that RIM tried to fob off on the market was a tablet that was smaller than the iPad and, perhaps fatally, had a new operating system that was a work in progress.  It did not even have a mail application.  There were few apps for the device.  As a result, the marketplace killed them.  A major software upgrade to correct the shortcomings was promised and then delayed.   Meanwhile, of course, Apply has released and sold millions of the iPad 1 and iPad 2 and an iPad 3 is in the works.  Apple is working very hard to maintain its lead.  RIM is still struggling to make its first generation Playbook a realistic option.

Finally, in recent weeks, RIM has been forced to do what Hewlett Packard did some months ago.  They slashed the price to clear inventories.  For HP, the market told them that their tablet was a great value at $100, a price point that was obviously unsustainable.  For RIM, it is not quite so clear what the market is saying, but a 64 GB Playbook that was previously offered for sale at $699 can now be bought for $299.  At the same time at the Consumer Electronics Show in Las Vegas, the long-promised Playbook OS 2.0 has been receiving raves from the press.   It is finally ready for prime time.

Why, you might well ask?  Well, I can evade that question by saying that I didn't actually need a Bentley either!  I don't know why I bought it, other than to say:
So, here is my assessment so far, with the caveat that everything on the software side will change in February with the release of Playbook OS 2.0.

I am really impressed.  It is well-built and well-designed.  The 7 inch screen is bright and clear.  The supplied HD video sample is breathtaking on this screen.  There are stereo speakers in the front of the device, something Apple has not been able to do so far.  The size splits the difference nicely between my iPhone 4 and my iPad.

It is fast and responsive.  It seems to run multiple apps simultaneously with no effort.

It has a micro-HDMI output and connects with no effort to an HDMI supplied television.  Everything on the Playbook screen is mirrored on the television screen in full 1080p resolution and looks truly wonderful.

The Playbook has front and rear facing cameras, at 3 and 5 megapixels respectively.

Being in Canada I have not had a chance to see a Kindle Fire, but the screen has identical specs as the Playbook in size and resolution.  However, it has only 8GB internal storage, of which 6GB is available to the user.

My impression of Playbook OS 1.0 is that it is "promising."  It is intuitive to use and navigate and the supplied apps work well.  The real story will be OS 2.0.  Android application compatibility and a powerful messaging and mail app are promised among other goodies.

The existing apps available on the Blackberry store are disappointing to say the least.  There does not even seem to be a Kindle app, although there is an app for Kobo and a number of other e-reader apps.

The browser is perfectly fine, and Flash works as advertised.

I have not tried the videoconferencing app yet but would be surprised if it does not work well.

At $299 it is a legitimate alternative to the $699 Apple 2 for cost-conscious buyers and for those who value the smaller form factor and the Blackberry Bridge function.  I have not mentioned this latter feature yet, and personally have no use for it, but it could be a killer app for the large numbers of people who use Blackberry smartphones.

I really like the Playbook for reading text, including ebooks.  The iPad's screen resolution is perfectly adequate for most purposes, but for text there is an annoying amount of pixellation that can distract from the reading experience.  iPad 3 is rumoured to include a "retina display," which on my iPhone 4 is brilliant.  The Playbook displays text almost as well as my iPhone, which means that no pixellation is evident as normal font sizes and at a normal distance from the eyes.  The 7 inch screen is the size of a paperback page and the device is very comfortable to hold for extended periods while reading.

I also like the Playbook for watching video.  The screen is vivid and there is no difficulty displaying full HD content.  Having front-facing stereo speakers enhances the video and gaming experiences.

The HDMI output displays HD video and stereo sound to an external television or monitor.  This makes the Playbook an excellent choice if you are travelling and want to show a presentation on an HDMI supplied screen.

I am still looking forward to the iPad 3.  But it will come in at more than twice the price of the Playbook at its current pricing, and I doubt it will be twice the machine.  It may match the resolution of the Playbook screen and will offer a better selection of apps, but I think that RIM deserves its chance in the marketplace if its new operating system is as good as it looks.  It will depend on reviewers and developers and finally the buying public.  Reviewers have been killing RIM for the past year.  I think the company deserves a chance to see what this device can do with reasonable expectations attached to it.

Developers are going to have to see that it is worth their while to develop apps to take advantage of the hardware and operating system, but Android compatibility may greatly level the software playing field.

As a Canadian I don't want to see RIM go the way of Avro and Nortel.   I hope that the market travails of the past year have taught RIM's management that they need to be realistic about the markets they are in, and to define the market segments for their devices with greater precision so as to give buyers good reasons to buy their products.

Bottom line:  the Playbook is going to stay in my briefcase because it is a perfect road companion, especially for reading ebooks.  Once Playbook OS 2.0 is out it will be an excellent e-mail device for the road as well.  I will likely start leaving my iPad at home for surfing on the couch and playing games.
Posted by Alan Pratt at 2:44 PM