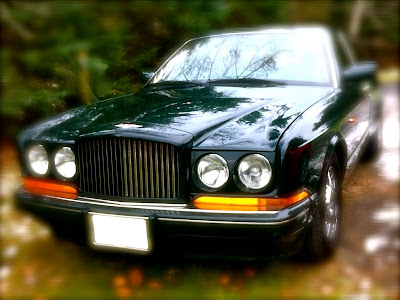 It seems I have bought a Bentley.

It all started in Montreal this summer. We went there for a week's vacation. As it turned out, I ended up getting myself on the news over an issue that arose from my work, and all of that ended up eating up quite a bit of the week off. It was a good week though. I spent quite a bit of time working on my novel. Yes, the one I announced was finished a year ago! More on that another time, perhaps.

Anyway, as my main character would say. Anyway...

For some reason I had chosen this particular week to start looking around in eBay. Something I had never done before. 'What would I like to shop for?' I asked myself. For some reason I found myself shopping for Bentleys.

Yes, Bentleys. The grandest of British cars. Well, after Rolls-Royce of course. But I could never see myself in a Rolls. Too corporate, too Maharishi, too formal, too stiff, too establishment.

But a Bentley. Now there's a thought, or so I thought. The Blower Bentleys of the '30s (and of John Steed in the '60s). Bentley was owned by Rolls for decades, and is now owned by Volkswagen. But there is something very British about Bentley without that extra excess of a Rolls. No Flying Lady. No grille that looks like a Greek temple. A Bentley is dashing where a Rolls is square and uncool.

A Bentley is - or was until the Germans bought the company - a last bastion of essentially something British. Not the current German Bentleys, which are selling in great numbers to professional athletes,  Middle-Eastern princes and apparently a great many others too, but the older Rolls-built ones.

I was shopping for something to fill a void in my automotive life. I already have a wonderful German car, an American SUV and a little Japanese sports car. But the era of cars like the traditional Bentleys is dying. They are too big, too low-tech, too leathery, too space-inefficient, just too ridiculous altogether.

But somehow the idea had taken hold of me. I just knew I had to have one, before it was too late. And then, as it inevitably does, my attention drifted off to other things.

Until the other day.

I was perusing eBay and there was My Car. A 1993 British Racing Green (of course) Continental R. With a reasonable asking price. In Toronto. I had been looking at Florida cars, Nevada cars, California cars. I had been figuring out all the little things I would have to do to get a U.S. registered Bentley into Canada. There would be the inconvenience of getting down to see the car, then getting the car home and across the border, the import duty, the conversion to Canadian specs (daytime running lights) and all the rest.

But here was My Car. In Toronto. For a reasonable price. My Car was $300,000 in Canada when it was new. The asking price was under 10% of that. The mileage was only 50% more than my two-year-old Audi's. Did I mention that it was British Racing Green?

Three minutes before the auction ended I put in a lowball bid. I was planning to tell the seller that this was as high as I could go without seeing the car. Just a couple of minutes later I got an email that I had won the bid. I was paying 8% of the original price of the car!

I am going to pick it up Tuesday. I have been poring over the pictures from eBay, imagining the smell of the wood and leather inside, the velvety smoothness of 450 lb-feet of torque from the big turbocharged Rolls V8, the graceful lines and enormous presence of the beautiful Bentley Continental R.


It is quite an absurd car in nearly every way, of course, if you were to insist on being rational about it. It is far too big, too much of a gas-guzzler, just too much of everything!

The part that surprises me the most is the low tech part. It will be nice for you to go back in time when life was simple and everything was not connected to the internet

I agree with Angelina, I also prefer low tech cars, rather than all of the computerized vehicles today. Sounds like you've choosen something really nice!