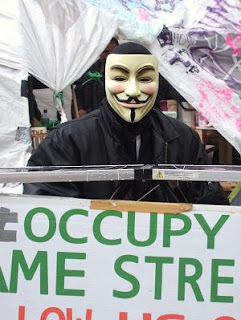 From the beginning of the "Occupy Wall Street" movement, which as of now has expanded to cities all over the western world, I have had a distinct sense of ambivalence about it.  On one hand it is proper for youth -- maybe even the duty of youth -- to protest against the world that has been created by their seniors.  I can't think of my own youth without thinking about civil rights protests, the 1968 Democratic Convention, even Woodstock which in its own way was a rejection of the corporate world.  It is the job of the young to be critical of the world of the old.

Even at 60, I have not given up my youthful ambition of changing the world, or at least of trying. But if you want to change the world, it is not enough to know what makes the world something that should change; it seems to me that it is also necessary to have the idea of what it needs to change to. And this is where the Occupy protesters seem to me to have no vision whatsoever. It may be that they are against the current economic and political order. It is not hard to find flaws there.   But what would they like the world to become?

The Occupy movement has been inspired by the Arab Spring, but the Arab Spring was first of all a true popular movement and second of all directed at clear and obvious action: the removal from office of despotic dictators. There is no Mubarak or Gaddafi against whom the Occupy protesters can aim their anger. There is also no clear goal, such as the removal of Mubarak or Gadhafi was to the protesters in Egypt and Libya. There is instead, it seems to me, an unfocused anger, an alienation. The Occupy protesters may be rebels without a cause more than anything.

To me, the Occupy movement is simply an outgrowth of the anti--globalization movement that has plagued G8 and G20 meetings over the past few years. In other words, a great deal of theatrical venting against men in suits and not much more than that.

I understand youthful alienation, and I recall vividly being an alienated youth. but if the object of this movement is to change the world, it is not enough to draw attention to the fact that the world needs to be changed. I understand frustration with the current economic and political order. Too much of the wealth of the world is owned by too few people, and the wrong people to boot. It should be the people who create who attract wealth. It should not be the people who run investment banks.

The political order too is dismal.  Here in Canada there has only been one recent political figure capable of generating genuine enthusiasm. Unfortunately, Jack Layton died of cancer a few months ago at the height of his political reputation, leaving everyone else in the shadows of his promise. We are left with the governing Conservatives who have achieved the rather astonishing feat of being intensely ideological and of the same time being intensely bland. We have the vestiges of the Liberal party, which has managed its affairs such that the only person who could possibly lead it out of its dismal decline has been forced to take its interim leadership on the promise that he will not actually become the leader. And we have the NDP, which without Layton seems like a rudderless, leaderless coalition of kids from Québec and an uninspiring ragtag from the rest of the country.

At least we have it better than in the United States. It seems astonishing to me that it is less than three years since the glorious day that Barack Obama was sworn in as president. It really seemed, that day, that a genuine new era was dawning. It seemed that almost anything might be possible. Now, except for one fact, Barack Obama would seem to be on his way to becoming another Jimmy Carter, a one-term Democrat who went from a fresh face to a has-been in less than four years.   The fact to which I refer is that the current slate of candidates being put forward by the Republican Party is probably the most laughable set of clowns ever considered for public office.  We have the prospect of the richest country in the history of the world on the precipice of defaulting on its loans because the idiots they have elected can't get over their petty partisan differences.

In Europe we have finally seen the last, at least as a political leader, of Silvio (Bunga-Bunga) Berlusconi.  We have Sarkozy, Cameron, Merkel, Netanyahu and Putin.   No wonder the young despair of political solutions.

But still, if all the Occupy movement is about is to express disappointment, where is its idealism? Where is the inspirational leadership that might help us envision the new world that might replace the one that the protesters find so lacking? Where are the strategists who might help bring that new world into being? The Occupy movement is not in reality a movement, but a mob. As a mob, it will always gravitate towards the lowest common denominator.  It can never aspire to anything.

As a person who believes in the possibility of change, I believe that the written word is more powerful than the mob. I believe that the dissemination of ideas and debate are more powerful than street theatre, the erection of tents in public spaces and confrontations with police. I believe that it is our duty as citizens not only to despair of the world in which we find ourselves but to think of ways to improve it. I believe, and in this I may have much in common with the Occupy protesters, that we are witnessing the end of an economic and political era, but at the same time I believe that a new and better era will not begin unless the citizens of the world begin to come up with some ideas for improving the world and then acting upon them.

I see the Occupy movement as a copout and a waste of a great amount of youthful energy that, frankly, we need if the world was going to become a better place.  And that is why it saddens me.

“The Occupy protesters may be rebels without a cause more than anything.” I disagree. I believe Occupy served in a timely way to begin a conversation. This is a conversation focused on disparity. The disparity of wealth, economic and political imbalance and to a large extent the contamination of the environment from mass extraction of natural resources is at the core of this movement. That is the beginning of the conversation.
If it appears they have no leader, it is intentional. The Occupy movement is about the 99% who speak with one voice collectively. Make decisions collectively, not unlike a democracy.
Indeed I agree, now that Occupy has got some attention they need to refocus their energy on how to continue that conversation into a plan of action. The movement is more than “alienated youth” it is about saying that they will no longer condone the actions of the 1% to control their future and more importantly the future generations. It’s about standing up for what you believe against all probability. It’s about speaking up. It is about hope

I hope you are right and I'm wrong on this one!

You know me... just saying!